The following is a translation from "Spur II Nachrichten" ( 'Gauge 2 News) magazine No 2 December 1985. The magazine was published in Germany - in German only- from 1985 to 2005 by H-Jürgen Neumann .You have met Mr. Neumann through our previous articles. H.-Jürgen Neumann was the founder of one of the biggest and later the most influential LGB Club in Germany ;" Club der LGB Freunde Rhein/Sieg" ( LGB Club LGB Friends Rhein-Sieg). Mr. Neumann was contacted by Yours Truly in February 2013. He is doing very well and was truly happy to be contacted about LGB matters, again. Mr. H-Jürgen Neumann gave us permission to translate all previous articles from his magazines as well as those from his web site LGB Much. So come and join us through a ride through history, the LGB history from 1968 to 2005.This is part 2 of an article about the very beginnings of LGB in the USA, quite some time before LGBoA was established.

(This change in the Club structure) brought real collector-experts to the BTO newsletter generating for the first time from within the club membership. They completely dwarfed all the expertise I had so far with their detailed knowledge about single variations and material- and color-combinations of locos and cars. Joe Hyvla's little brochure, out-of-stock by now, for US$ 10.00 leaves behind clearly and decidedly the first German collectors catalogue by Christmann in regard to describing each and every single model version. Apparently there were a whole slew of  loco and car modifications (made) that were never listed in any (LGB) catalogue. There is -currently- a rumor going that two American LGB fans are working on a downright encyclopedia for LGB stock transcending far beyond Joe Hyvla's work. (Dr.Balzer - you guessed it  is talking about the book by John R Ottley and Joe Hyvla "Greenbergs Guide to LGB Trains" from 1989, which is out of print, no longer available, and considered a historic artefact today). 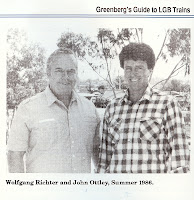 This work is supposed to include absolutely all known and until now unknown model details regarding color and signage and shall have colored photos. (Remember to print precision colored images in a book back in 1985 was considered very complicated and expensive).

They also had to implement the influence of the geographical spread of the LGB friends ranging from the New England States in the East to sunny California in the West. The solution was establishing two club regions: the East and the West Region each managed by a "Vice-President" and a "Director". Regarding the fact that 'In the Land of LGB' the sun never sets they allocated the rest of the world as well: Australia, Pacific and SouthAmerica were managed by the California management named "West Directorate"; us East Coast dwellers on the Atlantic border found ourselves to be in a group with Africa and (all) US States east of a line of Winnipeg (Manitoba) - Kansas City-Houston (Texas). In the meantime this 'Carolingian Allocation' has been modified by a Mid Western Region including the eastern and western States bordering the rivers Mississippi, Missouri and Ohio. It is pretty clear that the positive development of the US LGB Clubs is based upon the business success of Lehmann Garten Bahn (Lehmann Garden Train). The slowly increasing US$ Dollar exchange rate quickened exports of the now price-reduced LGB items considerably. It was also foreseeable that you had to expect upcoming competition; the G-Scale sector showed the highest growth rates in the model train market. This competitor arrived in the form of Kalamazoo Toy Train Works in 1981; They launched a starter set consisting of a US loco Type Reno 4-4-0 wood-fired, a coach and a "combine"-car (named Mountain-Central R.R.). The cars had four axles.
The Kalamazoo scale is Gauge One. She can be coupled with LGB material. The quality of the new LGB competition couldn't match LGB not in regard to drag force nor regarding technical detail: safe coupling didn't work all the time, coupling on the smallest curve radius was purely a matter of luck and the double-axle car trucks did not always match with the connecting truck mounts. It wasn't until ownership changed in 1983 and  a new, more effective management improved Kalamazoo's quality on the outside and the functioning. The spare parts supply left no wishes unfulfilled either. The loco and cars product line increased color-wise as well as in car types.
Originally this G-Scale market was dominated by LGB. Märklin's Gauge 1 obviously couldn't pack any public relevance. Now small 'work-out-of-my-garage'- manufacturers started to accumulate which mostly offered parts like trucks etc. Japan's Aster Live Steam model in Gauge 1 entered the market welcomed and 'appropriated' by the "steam-freaks" who were willing to shell out the required cash for those super-brass-models.+++++++++++++++++++++to be continued++++++++++++++++++++++
Posted by Famous Klaus at 9:04 AM No comments:

The following is a translation from "Spur II Nachrichten" ( 'Gauge 2 News) magazine No 2 December 1985. The magazine was published in Germany - in German only- from 1985 to 2005 by H-Jürgen Neumann .You have met Mr. Neumann through our previous articles. H.-Jürgen Neumann was the founder of one of the biggest and later the most influential LGB Club in Germany ;" Club der LGB Freunde Rhein/Sieg" ( LGB Club LGB Friends Rhein-Sieg). Mr. Neumann was contacted by Yours Truly in February 2013. He is doing very well and was truly happy to be contacted about LGB matters, again. Mr. H-Jürgen Neumann gave us permission to translate all previous articles from his magazines as well as those from his web site LGB Much. So come and join us through a ride through history, the LGB history from 1968 to 2005.

Today we are starting with (the first part of) an article about the very beginnings of LGB in the USA, quite some time before LGBoA was established.

In our first Magazine we already announced that Dr. Balzer from Aachen, being the expert for the American LGB market, agreed to report about the American LGB Club.
As a preface to the following report we'd like to thank Dr. Balzer for all his wonderful work and his following article. So please read on:
Every LGB fan reading carefully through the article in magazine No.1, page 9 will notice the high percentage of  'Made-for-USA-only specialty series'. In 1984 6 out of 16 specialty products were made for the USA. Especially worth mentioning are the "Buffalo Pass" (20301 BP) and the "Marshall Field" (20301 MF). The pleasantly constant large offer of US-related driving stock in the past years matches the importance of the US market for the Lehmann company. As LGB fans we can only be very happy about this development since only successful marketing, big lot sizes (in manufacturing) and profitable sales in the US- market facilitate the existence of Lehmann-Groß-Bahn ( LGB stands for Lehmann-Groß-Bahn meaning Lehmann Big Train). We, the LGB fans benefit from success like that by enjoying reasonable prices.
Now, who are those people across the Atlantic proving themselves as persistent LGB fans - so far away from the LGB(native) home? On the occasion of visiting the US in 1980 I first learned about the existence of a group of LGB (friends) from an American model train dealer. This group (was said to have) had an overwhelming success with their model train layout displayed during the NMRA convention that year while running their trains in the pouring rain. Quite to the displeasure of some higher NMRA charges. They had insisted that the layout would NOT be shown during the official program but in an unofficial motel since one did not want to have any "toys" among the 'serious model railroaders'.
At this point in 1980 the LGB Club was 3 years old with Al Lentz as its founder and leader (Member "#1"); and the Big Train Operator (BTO) Newsletter first published  in 1978, purely hand-made, was celebrating its 2nd anniversary. (for more historic background information about Al Lentz please visit this link to BTO. Yours truly finds it very telling in many aspects.....enjoy:

article continued: As often in life frustration was the impulse to new beginnings. Al Lentz reported in his memoirs of the anger that got the better of him when  he got completely overlooked by the judges; back then, still in N-track, he was displaying his 'carnival-module' complete with carousel, roller-coaster etc and the judges so ignored him - just because they found the carnival-module despite all its very fine technical sophistication displayed had no parking lots.
Only Jim Conway, owner of CON-COR, who thought of Al Lentz' module as totally prize-worthy awarded him his own very first-time-commissioned "Special N Track Award". Still carrying quite a grudge Al Lentz returned home. Here he got the advice from a dealer friend to take a look at the newly arrived LGB trains. This was the beginning of the new friendship between Al Lentz and LGB which eventually led to the founding of the LGB Club with Al Lentz as their first president.
In 1983 the American LGB Club had 400 members with a focus on families with children. The low priced annual membership (family) fee was, US$ 15, US$ 12.00 for singles. In addition to the annual meeting, mostly in Pennsylvania (Al Lentz' home State) in the early years, the BTO newsletter strengthened  the connection among club members. Some problems arose for the editorial department; due to the small number of LGB friends the 'influx' of adequate articles was small, too.
Within the first 5 years the interests of the members and the driving stock was pretty uniform which changed with growing membership. In addition to (pure) train operators "fraction(s)" of The Collectors, of  DIY'ers and of Live-Steamers were forming.      +++++++++++++++++++++to be continued++++++++++++++


Posted by Famous Klaus at 3:12 PM No comments: