I always had some repairs with me alongside a number of wishes and requests from our club members especially those looking for spare parts. Those wishes were promptly worked on upon my arrival. And it went without saying that I joined their breakfast break at 9.00 a.m. Of course I made sure that coffee and doughnuts were on me. Only then I went to see the 'bosses' and other departments.
Mrs. Grimm headed and managed her "Grimm's spare parts department" for many years at the Annual LGB Club Conventions; which she organized for years in co-operation with her husband who also worked for LGB as head of assembling. Club members took their LGB worries and pains mostly in form of their engines and cars to her 'booth' were most of them found help right away. Tougher cases were taken back to the factory after the convention and returned  to their owners by mail. Every year when I attend the International Toy Fair in Nuremberg I stay at the "Pensione Grimm" and every evening then we go for dinner to the "Golden Hirsch" to reminisce about old times and exchange news.
There were a whole slew of great men and women at LGB with whom I struck up great friendships over the years. In addition to Messrs. Wolfgang, Johannes and Rolf Richter I most often contacted Messrs Schnidtmann and Jagiella; Mr. Schnidtmann was heading the "DesignTuning" department while Mr. Jagiella heading the printing department was my go-to guy for all things printing/labeling on club cars. When Mrs. Grimm entered  her - well-deserved - retirement Mr. Thier followed her as head of repairs. He learned the ropes quickly and he supported me and the LGB Club very well and just the way I was used to. Mr. Biedenbacher is head of customer service and we always shared a wonderful co-operation and collaboration. I remember very well that for what reason ever he needed two really old manual switches. He got them instantly for free out of my personal 'stock'....
Then there was the time when Mr (Klaus) Baumann was still VP of Sales. Looking back it is a fact that he was responsible for quite a big chunk of Lehmann's success. He was always on the front lines, attending each and every fair and convention and took care of each and every LGB fan. TV appearances and spontaneous interviews were his daily bread - he just was a celebrated character. We always got along really well and had great collaborations. If the club had to assemble a layout within an (LGB) convention booth I just sat down with him briefly, talked it over and never heard from or saw him again until the convention opened. He just new I would do it right. I fondly remember my Friday-Appointments (with Klaus Baumann) at the LGB factory where we went for lunch to the Italian restaurant, company credit card in hand. On those occasions we exchanged ideas, general LGB- world news, and scheduled new appointments.
I also always liked to work with Mr. Bauer. Years ago we met by pure coincidence  and jointly celebrated New Years Eve at Hotel Badersee in Grainau (Bavaria). It's a small world after all-sometimes...
I also received a lot of help from Mr. Michel (head of purchasing) and Mr. Gall (Technical Director). Mrs. Gerl, the former Ms. Krueger, always welcomed me with a cup of coffee. Mrs. Aumer, Wolfgang Richter's personal secretary, secured my appointments with the bosses. In earlier years when Mr. Ottinger was still head of shipping&dispatch he helped me a great deal with brochures, pamphlets, and catalogs.+++++++++++++++++++to be continued+++++++++++++++++++++++
Posted by Famous Klaus at 2:50 PM No comments:

...I (HJN) had won the prize numbering somewhere between # 11 and # 50: a car of my choice! Writing this is the opportunity for me to make a confession to the former jury: I didn't have enough tracks for the branch-lines. And the photo in the hallway was made possible by me taking off track in the living room, rushing to put them down someplace else! There- I said it, 34 years later. But even back then I didn't have any remorse since 4 weeks later I had bought so much more track material that the layout had grown respectively.
I picked up my prized car in Nuremberg myself after arranging for a meeting with Mr. Wolfgang Richter beforehand. I was amicably welcomed and since I brought my slide projector did a show of my layout. (Dearest Reader, please know that in the early 70's the worst thing you could do at a German party was make people watch slide shows...Yours Truly...) Frankly, I was under the impression that he really liked my slide show because, after all, afterwards he took me on a tour through the whole factory - unhurriedly. And then I was invited for lunch to a restaurant near by. To me it was like pigs did fly!...Those were the beginnings of a friendship that kept until today (in 2006). But I also made sure that whenever afterwards I scheduled a visit to the factory - which became regular visits - I made sure it fit their plans and I was welcomed to show up. The workload for Wolfgang Richter and then later for Rolf and Johannes increased so much that they couldn't afford hour-long breaks just like that.

A close collaboration then ensued due to the founding of the LGB Club Rhein/Sieg, which had its own club magazine, shows and exhibitions sharing quite often a booth with Lehmann (LGB). This allowed  me to experience great support from LGB for me personally and for our club. We exhibited our club at the LGB Summer Fest 1998 and at various fairs and shows, we managed Specialty shows about historic LGB stock, we hand-built pre-production models, consulted regarding new items and novelties and reported about views, trends and opinions directly from the 'front line'.
Of course I visited the subsidiary "LGB of America" in later years in San Diego/CA. There is still a noce photo somewhere where I make myself very comfortable in the Richter-executive-chair at the desk where they worked if they came over from Nuremberg. I remember very well their  warehouse were all those "treasures" were stocked in droves. Treasures that were highly sought after by collectors here at home. They also had a "Inge" (German female first name short for Ingrid) which we called simply "the American Frau Grimm". (Ms Grimm was legendary in her knowledge -by heart!!- of each and every! spare part and LGB item EVER made, its price and the shelve it was stocked in). As far as the German Frau Grimm is concerned, the 'real' Frau Grimm -chief of the repair department in Nuremberg until 1999- we had an amicable relationship which I always nursed and cultivated even  until today. Ms Grimm was always the first to see when I visited LGB/Nuremberg. Usually I went there on Fridays and you knew(!) it was precisely 7.00 a.m. since I was entering their parking place exactly at that time..( and the bosses' cars were already there...)++++++++++++++++to be continued++++++++++++++++++++++++++
Posted by Famous Klaus at 2:39 PM No comments:

The LGB Collector - A Lifetime Story

- I dedicated this report to Mr. Wolfgang Richter! - Thank you! - (HJN) 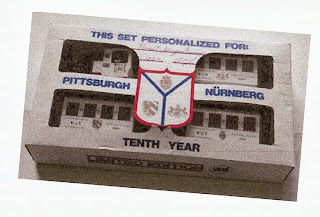 Anniversary set commemorating the 10th anniversary of the American BTO-LGB Clubs in 1988. It contains a 2010D loco and three coaches in white with commemorative labeling.  On the rear side the loco has a brass plate displaying engraved initials (of the owner) and his/her club member number - in this case H-J N 1087-. Limited edition of 500. It came in a white box, made in USA, printed labeling, and individual (clubmember) names handwritten by Alfred Lenz, back then (in 1988) the president of the BTO clubs. I (HJN) received this trainset in person while attending the anniversary convention in Pittsburgh. That's not the only reason why it means so much to me but also because of the many friendships with American LGB Friends.

The LGB Collector - a very personal story
When in 1972 I (HJN) saw LGB for the very first time I was 23 years old, was moved to Siegen (about 60 miles east of Cologne/West Germany) by my employer and found myself one day in the toy department "Mehr am Markt" in Siegen. If you took the stairs to the 2nd floor and turned right there was a corner reserved for the Lehmann Big Train. There you would get everything that was manufactured back then; and they still offered rail road vehicles from the very first years with locomotives carrying Heuler motors. All items were subject to price maintenance. I remember very well that when I asked for a price discount for a pretty dusty green U-series loco the salesman had to go and call the LGB factory first to get permission to do so. That's how it used to be! If you come to think  about some of the price wars fought in later years - that early systems wasn't that bad--- in any case there were enough dealers carrying LGB. Even the "Globus" department store (compare to a SuperTarget) offered LGB. And while doing the weekly grocery shopping we regularly bought one car. Everything was so much less expensive then. Even the "Handelshof" (think Cosco concept) as a cash&carry market offered the Lehmann Big Train. I remember exactly the incident where the small, completely blue E-loco(s) LGB# 2031 were piled up high in that store because that color compared to her 'prettier' sister (engines) wasn't favored enough (by buyers). Today (2006) this loco is one of the most wanted and most valuable of her time! That's how it is sometimes...

Back then one was not an LGB collector. One just went and bought all trains, locos and cars that came out as far as your financial means let you. Most probably almost always every started (the hobby) with a starter set. Me too! Then came the various cars and track material. I remember very well the February deadline for the contest by Lehmann for the prettiest indoor layout. Another contest for outdoor layouts had already been done two years ago. This time - of course - I wanted to participate and set up my layout on the floor of my rented apartment, round-about in the living room with a pass-track to the kitchen and into the bedroom. See layout blueprint below..... 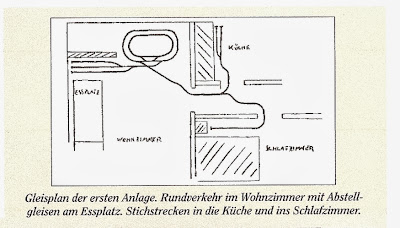