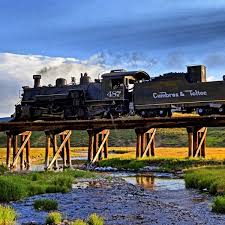 Travelling the Cumbres and Toltec Line is a great adventure by itself. "The line is a 3 ft (914 mm) narrow-gauge heritage railroad running for 64 miles (103 km) between Antonito, Colorado and Chama, New Mexico, United States. The railroad gets its name from two geographical features along the route, the 10,015-foot (3,053 m)-high Cumbres Pass and the Toltec Gorge. Originally part of the Denver and Rio Grande Western Railroad's narrow-gauge network, the line has been jointly owned by the states of Colorado and New Mexico since 1970." (quote from Wikipedia, for detailed information go to Cumbres&Toltec Wikipedia.)

Klaus had visited the railroad already and knew about the excellent trip, vistas and overall fantastic narrow-gauge adventure you can experience. In 1995 Wolfgang Richter joined Klaus in Klaus' 50th birthday celebration festivities in Skagway/Alaska. There they came up with the idea to go on a joint trip along the Cumbres&Toltec line.

The summer of 1996 was  as good a time as any to go on and realize their earlier plan. Said and Done. Wolfgang Richter had some business at  LGB of America/San Diego. He organized his itinerary to fly in and to eventually meet up with Klaus in Chama/NM by late August. They stayed in the Branding Iron Motel in Chama which still exists today. For dinner they went to "Vera" to get a steak dinner. Klaus, the ever creative type, had brought a specialty beer from Germany and had come up with a 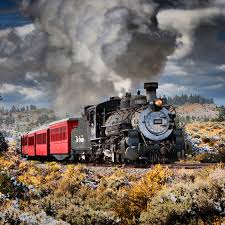 deal for the owner of "Vera" : whatever was ordered as beverages that night for his table, this specialty beer would be served. You can imagine the surprise that Wolfgang and his entourage encountered when they were served an original dark heavy German beer in the middle of New Mexico's nowhere. 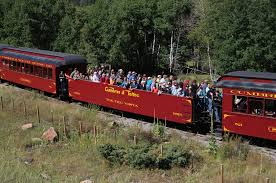 The next day they started their journey on the Cumbres and Toltec to Antonito/CO. Back then you could move through the whole train, each and every car, throughout your time aboard the train. That way they also got to experience the open air gondola.
Arriving in Antonito they stayed at the hotel directly across the railroad depot. Antonito is a very small town, then and now. After an uneventful snack they went to bed to get back to Chama the next day. Another fantastic, scenic train ride brought them to the end of their joint journey.

Wolfgang went back to San Diego to fly back to Germany. Klaus drove to Denver to catch a Lufthansa flight back to Frankfurt. The restaurant Vera doesn't exist anymore. The little hotel in Antonito has gone through a lot of owners. The Friends of the Cumbres And Toltec have a fantastic webcam at  Friends of CST . Enjoy the views!
Posted by Famous Klaus at 11:22 AM No comments: