A collection of special trains or Starter Sets may have its own charm. At least as long as one doesn't buy huge volume of one kind (of loco) and store it in the basement hoping for increasing value overtime. There were some fine trains out there like the Pinzgau train (LGB# 20520) or the Furka-Oberalp train (LGB# 20512) mirroring the archetype nicely. Optically pretty 'advertising' trains were the Nürnberger Lebkuchen train (LGB#20526 - Nuremberg gingerbread train), the Philips Train (LGB# 20412) as well as the beer trains Lütgenau (LGB# 20536) and Schweiger (LGB# 20539). Then there were special train(sets) for the American market like the Marshall Field Train (LGB# 20534) and the Dodge City Little Billy Train (LGB# 20701). 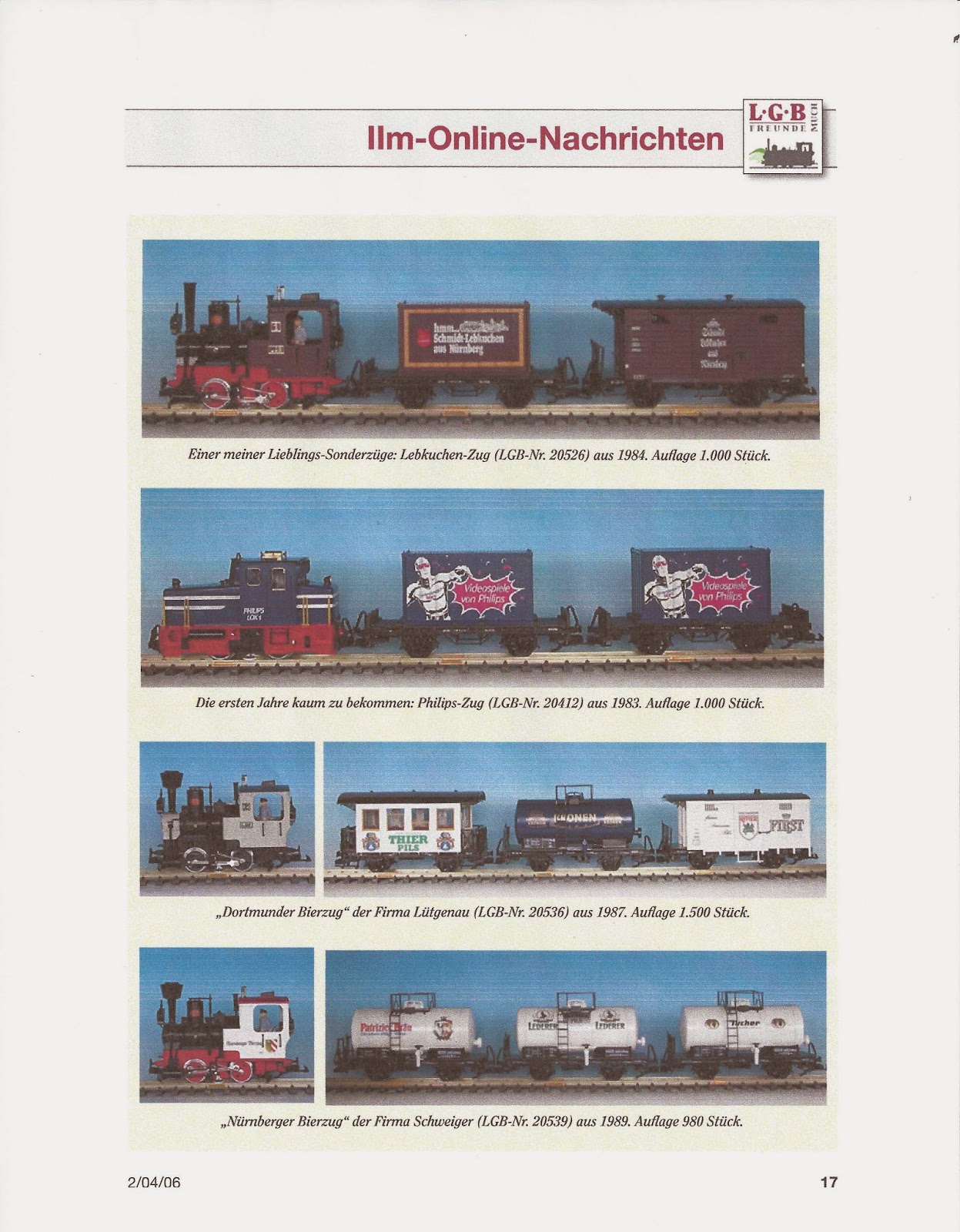 The Red Train (LGB# 20401 RZ) and the Blue Train (LGB# 20301 BZ) were supposed to tie in with the success of the Anniversary train (set) which to some degree they did. There were many, many other train sets; and the Lehman factory did not like at all the fact that quite a number of sets went straight into the basement of collectors rather than into the living rooms of LGB beginners. Regarding this subject my opinion has always been that LGB could very well afford to 'give' the collector a highly subsidized train set once in a while when they were making good money out of him (all the other time of the relationship).
The 'cherry on top' of any collection, of course, was the Golden Train (LGB # 20100) of which just 200 were made due to severe problems during the process of steaming the leaf gold onto the Stainz loco. Original plans were to make 1,000 train sets; now you do the math and figure out how many of the  low and high sided gondolas are still living 'single lives' at LGB fans' homes or are trailing behind ordinary LGB locos...


Of course there was a lot of rubbish among the special trains and special cars. I don't want to name them here to not insult anyone belatedly; but everyone will know what I am talking about..( this is in reference to some pretty ugly circumstances involving a big discounter in Germany and the authorized LGB dealership in the late 80's and early 90's. And the eventually "unsellable" golden train'set'. Yours Truly)

Sadly, the long planned LGB-Museum in Nuremberg never realized. When the factory extension was built on to the existing LGB lot  in the early 90's a museum was part of the planning but sadly wasn't built. Now other things are more important...(remember, this article is from 2006. In 2012/13 the famous Spielwaren Museum= Toy Museum Nuremberg added a wing for LGB which is serviced and managed by the LGB Booster Club. See LGB Yarner blog 05/2013). Twice in the past there was a " LGB-Museum" at convention boothes, once in 1988 - 20th anniversary LGB- and in 2000 jointly with Uwe Klöting at the International Train Show in Cologne. I (HJN) furnished and managed both which was a lot of work as well as a great honor.
Today you'll find a lot of LGB layouts offered by estates. More than once I received calls from people telling me that their grandfather had passed away and that they wanted to sell their inherited LGB collection. I always asked immediately if they or their children wouldn't like to continue the hobby themselves. Their responses told me that the LGB 'bug' obviously could not be passed on and that they obviously have different interests today. Sad, but nothing you can do...
The driving stock out of these estates are often unfit to go into or extend collections. They have been played with - which they were destined to be, not to forget. Often, driving stock from outdoor layouts was intensly operated; meaning they suffered from weather, screws are rusty and the plastic became brittle or broke off already (parts). In case very rare pieces are part of such a layout (collection) one can try to buy those and restore them. But even the repair department of LGB at the factory - which brought new shine to old driving stock in years passed - have now run out of  historic spare parts. Some (collectors) buy bad looking items at a flea market just to use them as spare part provider.
Maybe the (LGB fan) who has a nice historic LGB portfolio should start thinking about how and to whom he wants to pass on his collection. To see these items end up on eBay is just a pity.

I do hope I was able to take you with me on (my) journey into the world of LGB and want to focus one last time on our (LGB Friends of Much) motto: "back to the roots". To quote a famous citizen: "there is magic in all things new" and I say " but also in many old things, too." Just like no one would get the idea to collect modern cars they do like to see Oldtimers in their garages. They (oldtimers) represent craftsmanship and their engineering is traceable. They are just like-able and something special. Just like you can transfer this thought to LGB ; back to the roots - wholeheartedly  and with enthusiasm.
H.-Jürgen Neumann
Posted by Famous Klaus at 12:46 PM 4 comments: