In 1968 Wolfgang and Eberhard Richter opened the L-G-B part of the company Lehmann Patentwerke with an 8-page catalog offering 3 locomotives and 9 cars ( 3 passenger cars, 3 open/flat cars 2 boxcars and one tank car), 6 different track items, 3 cable sets, 4 figurines, 1 throttle and 1 transformer. The big headline on the front page was " Das War Noch Nie Da" (verbatim "that was never there- yet") which translates somewhat into "You've never seen anything like this" or Nothing like that ever existed".

On page 4 they showcased their very first ever garden locomotives in a scale yet unheard of in toys : 1 : 22

The life size models for these locomotives where loco KL 1994/1889 Bn2t Nr.1 of the Austrian Salzkammergut Railway (LGB 2010), the loco 2774/1892 Bn2t Nr.2 of the Steiermaerkischen Railway (LGB 2020) and the loco Krauss XXXII 2700 1923 Nr.4 of the Huettenwerke Siegerland
The Krauss locomotive was very similar to the two Austrian locomotives but had a slightly longer boiler. Eberhard Richter saw the general similarity in those types and the chance of making one model and get 3 locomotives out of it by changing cabin color, smoke stack form and offering lighting or not. And so was born the LGB 2040 No. 4 -- and as well the 2010 and 2020.

LGB manufactured the 2040 until 1975. Meanwhile the LGB 2010 (affectionately known as the Stainz) and somewhat less the LGB 2020 turned real shooting stars. Customers couldn't get enough of the cute little locomotive , available as set or single. The price was decent ( DM 95.00 or US$ 30.00) and you didn't need a wooden plate or anything to mount it on. Tracks worked on almost any surface, soil, garden, driveway, floor - you name it. With the lowest price and pretty basic configuration for the 2040 (no engineer, no light) the demand turned more and more to the 2010. The ongoing "Wirtschaftswunder" in Western Germany, namely the enormous economic growth spanning 3 decades helped LGB to sell more and more every year, expanding their offerings from 3 locomotives in 1968 to 20 locomotives (steam,diesel,electric) by 1978. 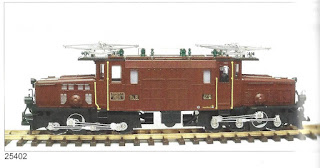 By then the LGB 2040 was retired for a while replaced by the 2015 and ever more configurations of the 2010. So, when Wolfgang and Eberhard needed a number for the newly constructed Crocodile the number 2040 was just coming in handy. In 1993 they had sold so many locos and had come up with so many new types, series and configurations that LGB expanded the numbering system by one digit to 5 digit numbers.

Hence the Crocodile got the LGB # 2040 and thus became known as such. No matter what configuration or coloring scheme she came in.